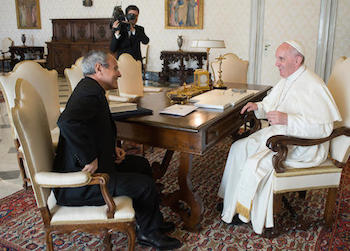 Yesterday morning, April 14, 2016, Fr. Julian Carrón, president of the Fraternity of Communion and Liberation, was received in a private audience with Pope Francis.
“Above all, it was an occasion to thank Pope Francis,” said Fr. Carrón, “for his witness of a gaze of tenderness and mercy towards a wounded humanity, which we are part of, because, today more then ever we need of it.”
“It has been a year since the Movement’s meeting with the Holy Father in St. Peter’s Square (March 7, 2015),” Fr. Carrón continued, “and I recounted to him the journey we’d made this year. I wanted to witness to the Pope our desire to follow him, becoming ever more one with his gaze on men and women, and on the world.”
Fr. Carrón concluded, “I’m immensely grateful for the possibility for this discussion, which was an encounter with Pope Francis, and for the paternal embrace with which he welcomed me and all of our vast reality. The Pope encouraged us to continue our journey of going deeper into the awareness of the grace that we have received in meeting Fr. Giussani, and thus we’ll be able to be the witnesses that he and the Church await from us. ”