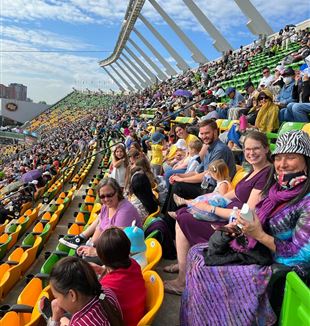 Our community has not gathered in a while, in part due to COVID-19. For one reason or another the only thing we had done together was the Way of the Cross. We met with families as friends, but not as a community. I remember telling my husband and some friends that I missed meeting as a community. This is because I came from a close-knit community where getting together regularly was essential.. Visiting the pope was much easier before we came to Canada. When the Pope would call us to Rome, we would pay $50 each and go on the trip together. At that time, it was very easy and accessible for us to decide to go together.

When the Pope announced his visit to Edmonton, I anticipated that we would go together, but the release date of the tickets was rapidly approaching and I hadn’t received the 50 tickets that I had asked for the CL community. Then I thought about what we’ve been listening to lately: we needed to be there firsthand.

The Movement is more than just a collection of propositions that we simply say yes to. There are times when I say ‘yes’ and do what is proposed. The day before the tickets were to be released, I discovered how to go as a group and I called every family personally. We didn't know whether we would be able to get tickets together until 10 minutes before the first release.. The most beautiful part was seeing how all the families preferred to be on the waiting list together rather than take tickets individually. Even then, it wasn’t evident to me that everyone had the same desire at heart.

After that, two beautiful weeks followed in which one woman invited all the community to her home for supper and another woman invited us to her camping site… It was like a mini vacation! After the last release of the tickets arrived, we still had not received the 50 tickets for CL, we took our tickets separately.
Within two hours, we had received the 50 tickets. Nobody had any doubt, each person gave away their personal tickets that were closer to the Pope to be together. We wanted to go together to thank the Holy Father who, despite his difficulties and health issues, came to Canada to help in the process of reconciliation between the Canadian Church and the Indigenous people. He came to help for the sins that have been done in the past, as a father who intercedes between his children.

It was important to us both as part of the Church and as members of CL to take part in this event. I want to thank Pope Francis because, with his paternal visit, he gave us the opportunity to renew our beautiful unity in this friendship in Christ that the Movement represents.

"In the face of evil,
we pray to the Lord of goodness"