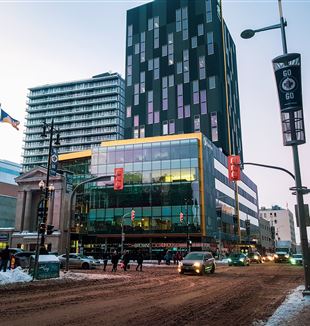 My first experiences of the movement were of incredible beauty and were revealed to me, not something that I generated; full of unexpected friends, memories and places. Yet, as soon as I left Toronto to move to Winnipeg, I forgot that I can't generate my own happiness and wanted to recreate this beauty through my own effort.

In 2017 my wife and I moved for my job. It was something I had always wanted: full time work playing music. However, it came at the cost of leaving all my friends behind, and soon enough I wanted so badly for that experience of beauty through the community to be my everyday reality again. In an attempt to recreate it, I called Paolo Palamara and asked him, “How do I create a community here in Winnipeg?”

On the face of it, this seems like a reasonable question. I suggested that by telling people in my local parish about Giussani and doing the School of Community together, I could build the community here in Winnipeg. Paolo stopped me and said, “Real community is born out of friendship.” It had only been a few months since I left, and I felt like I had learned nothing. I was grateful that Paolo was so frank with me — I needed that reminder. Paolo told me to email our secretary in Montreal, to see if someone from the Movement was already here.

A few months later, seemingly out of the blue, I got an email from a guy named Vicente. He told me that he met the Movement in Paraguay and had been living in Winnipeg for a long time now. He used to do SOC with others from Paraguay but they had moved back several years before, and he had been alone in the Movement here ever since.
What surprised me about Vicente was that he had never forgotten his experience, and despite not knowing anything about me, was eager to get to know me. It’s something I feel has happened to all of us. When I travelled to Italy years ago I met so many people who, in our initial encounter, wanted to know who I really was. There was nothing superficial. So a musician from southern Ontario and a teacher from Paraguay met and became friends in Winnipeg. All of it seems improbable, but the Holy Spirit works in mysterious ways. For the better part of a year, the community was just Vicente and I.
When the pandemic started, School of Community anchored me and helped me to look at reality. Many friends I’ve spoken with about their experience of the pandemic have mentioned that their fondness for the work of SOC also grew during this time, and I absolutely agree; but I also realized that being in a community of two people forced me to take the text more seriously. The reality was that the number of social events was smaller, and so what was left was the work itself. My affinity for the texts we read has grown substantially since the beginning of my time in Winnipeg.

We all have our biases and preferences, and regarding the community, I always wanted what I once had. But reality isn’t like that, and once you open yourself to God’s grace, you can see miracles happen. When the world was shut down, it seemed improbable that our community would grow, and yet that's exactly what happened. A couple named Kirsten and Stefan joined Vicente and me in the fall of 2020. Later on in the winter, my friend Mike joined after I sent him a SOC text that he found particularly helpful.

All of us came together with a desire for the infinite, and every week I am surprised by the intensity of our questions. My community here is nothing like the ones I’ve had in the past, yet it’s extremely familiar at the same time. The Holy Spirit animates all of us in the Movement in the same way.
A few months ago I spoke to my friend Benjamin in Montreal about this, and he was surprised to hear that firstly, there was a community here, and secondly, that I hadn’t just given up on the Movement altogether. He said that if he moved to a place where there was no community, he wasn’t sure he’d do anything about it. I told him I thought he was wrong about that. I believe that all of us, despite our affinity for the Movement, underestimate how completely the gaze of Christ has pierced us. It’s not something that you can just forget or abandon, and the community here in Winnipeg is a living example of that.