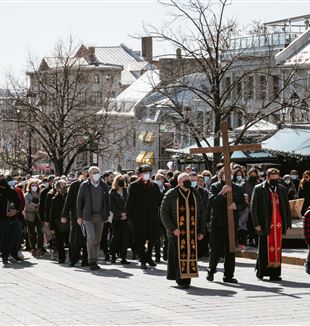 Many people had predicted that with online liturgies there would be a drop in church attendance with return to normality. So it was difficult to know if the faithful would still be interested in attending the Way of the Cross, a live procession, wearing masks and taking precautions with social distancing. Yet the Via Crucis was more popular than ever, with close to a thousand marchers moving in silence through the city’s famous old churches.

I was involved in the organization of the gesture and at the beginning of March, as we were looking for a representative image for the invitation to the Way of the Cross, a friend sent me a striking photo: a contemporary version of the Deposition of Christ. Only this time, instead of a museum viewing, it was retweeted thousands of times. It represented a 15th century Crucifix being taken out of the Armenian Cathedral of Lviv, Ukraine, to be stored in a bunker for protection. That very night, I got in contact with author of the photo, the Portuguese Photojournalist André Luís Alves who immediately granted us permission to use it.

With the Lenten season marked by the anguish and unimaginable sufferings of the war in Ukraine, we followed closely Pope Francis’s invitation to observe a Day of Fasting for Peace on Ash Wednesday, his repeated calls for peace, and the Act of Consecration of Russia and Ukraine to the Immaculate Heart of Mary on the feast of the Annunciation. The CL Choir, in preparing the hymns for the event, included a Ukrainian hymn, Stradalna Maty (Stabat Mater), along with Bogoroditse Devo, (Ave Maria) by Rachmaninoff, a piece that had already been part of the repertoire for many years.

Even though geographically Canada is half a world away from Ukraine, Canada is home to one of the largest Ukrainian diaspora communities in the world, at about 1.4 million people. In Montreal, there are over ten Ukrainian Greek-Catholic and Orthodox parishes and we invited them to the event.

A few days before the procession we received some complaints from the Ukrainian community raising concerns on including a Russian composer’s work among the hymns. This request echoed the cancellation of a young Russian pianist, Alexander Malofeev, scheduled to play with the Montreal Symphony Orchestra, a controversial decision, as the young musician had spoken out publicly against the war. And an ironic twist for a multicultural society that militates against any form of ethnophobia.

When similar concerns were raised with the 13th station of the Way of the Cross at the Colosseum, we understood that we should not be distracted by political nor cultural positions,but remain focussed on the original proposal of the gesture: a profound religious act keeping memory of the Passion of our Lord, offering the sufferings of the whole world.

Nevertheless, the dialogue we had gave way to another encounter: that of facing the profound invisible wounds provoked by the abominable violence of war.

To everyone’s surprise, on Good Friday, not one, but three Ukrainian priests, accompanied by members of their congregations, joined us in the Via Crucis, which Archbishop Christian Lépine, of Montreal graciously accepted to lead again. All three of the priests carried the cross through the streets of Old Montreal, from the historic Chapel of Notre-Dame-de-Bon-Secours to the Notre-Dame Basilica, followed by Saint Patrick Basilica, the Jesuit Church of the Gesù, then passing through Place Ville Marie to arrive three and a half hours later at Mary Queen of the World Cathedral.

When the choir performed Stradalna Maty in Ukrainian in the iconic Notre-Dame Basilica, the Ukrainian community stood up in total reverence. At the following station, at Saint Patrick Basilica, as the choir sang Bogoroditse Devo in Russian they stood up once again with the same reverence. This gesture spoke louder than words; it was an encounter with steadfast, unwavering faith. A faith that recognized that prayer – true conversation with God – transgresses language, national or political barriers.
In Mgr Lépine’s words, “Love is stronger than death, love is stronger than suffering, love is stronger than evil”.