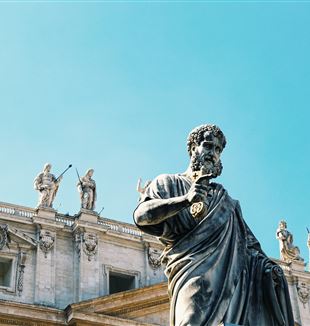 During the Papal Audience on the centenary of Fr. Giussani’s birth, I thought back to what I had learned during the Holy Father’s recent visit to Canada about the meaning of following Peter in my faith and in personally taking responsibility for the charism. In the weeks before the visit, I spoke to several friends and was surprised to discover that they had not even considered attending or following the events with Pope Francis. They made remarks like, “I thought it was intended only for Indigenous people.” These reactions provoked me as I had been interested in participating in the visit from the moment I learned of it. Of course, it was true that this “penitential pilgrimage” was for the Indigenous people of this land, but I couldn’t help but ask myself what the Pope’s words – and even his presence in our country – would mean for me, personally. I felt almost inexorably, and surprisingly, drawn to the event. This desire had been whetted by the work on the Spiritual Exercises in which Fr. Lepori reminded me that our following is always following Peter.

My desire, therefore, was to follow Peter here in our midst and to get close enough for his shadow to fall on me and heal me, as I had heard in the reading from Acts after Easter. So, in following in this small way, I witnessed many beautiful events on my little pilgrimage. Before my eyes Pope Francis persisted in the face of hostile discourse and even protests, none of which prevented him from proposing Christ as the one answer to our country’s woes.
I thought back to The Religious Sense, in which Giussani wrote about the violence of affirming oneself against everything (as some protesters did) while “we truly affirm ourselves only by accepting reality, so much so that, in fact, we begin to accept ourselves by accepting our existence, that is, a reality we have not given ourselves." I saw in the Holy Father that acceptance which made him completely certain and free. Just a few weeks later, I was considering the Papal Audience on October 15 and I very much wanted to go in person. While that was not ultimately possible, my desire to continue following remained. On the morning of the audience, I read the Holy Father’s speech and was moved by his esteem for Father Giussani and I felt impelled to see the Holy Father’s gaze on all of us as he delivered these remarks. This made me more excited to attend our Beginning Day in Montreal. When I arrived,I saw in the faces of the many thousands on the video as well as in my friends gathered in person, that gladness born of our own personal “Galilee” and the beauty of the road we are walking together following Peter.