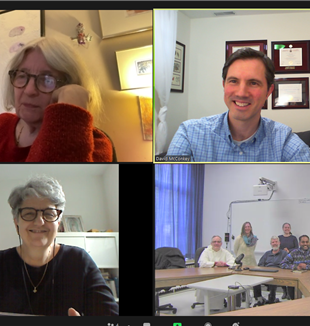 A number of years ago, I met the Movement here in Ottawa at Via Crucis, the Way of the Cross procession on Good Friday, while I was journeying towards full communion with the Church. Ever since, I’d been particularly struck by the gesture of the Easter and Christmas posters, which provide a beautiful marker and educates my attention during the liturgical seasons of Lent and Advent. I decided to also share these posters with certain others in my life, including my friend and spiritual director, Père Maxime Allard O.P., who is a Dominican friar.

During a visit with him about three years ago, when I first gave him a Christmas poster, he’d asked me, “What are you part of that’s interesting?”, which is in itself a rather remarkable question. I mentioned the friendship and gestures of the Movement. I’d recently been reading The Journey to Truth is an Experience, and in it, Fr. Giussani recounts how Père Maurice Cocagnac O.P., a French Dominican, was one of the early encouragers of the beginnings of the Movement. When Père Cocagnac visited the “raggio,” which were the weekly meetings that Fr. Giussani had with students, he’d remarked that he “had seen nothing like it in all of Europe.”
Wishing to draw on common ground, I’d mentioned Père Cocagnac to Père Maxime, and he’d exclaimed, “Ah! But I met Père Cocagnac in France during the early days of my vocation, and if he affirmed CL, it’s a very good thing you’re a part of!” In the past few years, I’d especially felt close to St. Dominic even as I was growing in my intimacy with Fr. Giussani; both their charism and intercession is a constant watering of my soul’s thirst for contemplation and fruitfulness.

When we were asked to seek the recognition of our local bishop for the Fraternity last autumn, we were also required to request the appointment of an Ecclesiastical Assistant. During this time, I was struck by both Fr. Carròn and Davide Prosperi’s call for responsibility and fidelity to the gift we had received through Fr. Giussani’s charism. When the responsible for Ottawa, David asked me who I would recommend for the position of Ecclesiastical Assistant, I was struck by his openness in asking me. I did not have a list, and neither did he. I just had one name that came to me: Père Maxime. We did not want the filling of this role just to be a mechanical or bureaucratic act. I’d approached Père Maxime to meet and propose this request to him. Just the day before we met, the CL website published an interview with Timothy Radcliffe, the former Master of the Order of Preachers (Dominicans) and a friend of Père Maxime. I’d brought along French copies of the first two books of Fr. Giussani’s trilogy. Père Maxime noted that “Us Dominicans have even published Giussani!” [CERF, the publisher in French, is a Dominican imprint] Such were the little auguries of grace, reminding us that we don’t merely choose an authority, we recognize him or her.

Père Maxime then left to take a sabbatical at a monastery in France for three months. Very recently, upon his return, the fraternity here in Ottawa was able to meet with Père Maxime – some online, many in person. As he enquired about our journey, and shared his own itinerary of faith, we were struck by his openness and the provision of the Mystery that allowed us to reach this new beginning with his accompaniment. In the last few years, we have felt the loss of some close friends, including the presence of the Memores Domini. Yet somehow, in our seeming orphanhood, the Holy Spirit is causing us to mature in our awareness and our faith through our simple acts of following, trusting and paying attention.

To conclude, I have been refreshed by the call of Davide Prosperi in his recent communication (November 29, 2021):
We have a season of creativity and mission ahead of us. Let us therefore set to work. God is calling us to live with freedom and courage in a world that awaits the announcement of His presence. And we will respond to this call if we are credible witnesses to the beauty of what we have encountered.
At a time of ever greater tribulation and the temptation to nihilism, may the encounter with Christ continue to renew us daily.