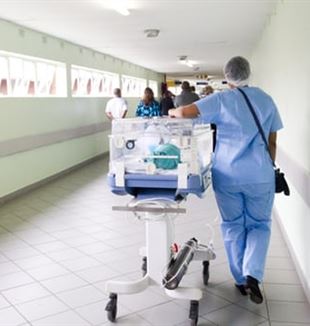 Over the last few days, I began listening to the Russian choral music [Russian Folk Music that is part of the Spirito Gentil music collection curated by Father Luigi Giussani] on my way to work. I remember as if it were yesterday the first time I listened to this music. At the time, it was so alien to my sensibility, but strong was the desire to find out what was behind this music and why Don Giuss was in love with it. He loved it very much because it was an expression of a people, and he made us listen to it, so much so that it became part of my own story. When you hear it, you perceive this impressive unity, this touching chorus in the background. The choir as it sings expresses this experience of a people in a sublime way, and as the soloist begins to sing, his voice rises up as an expression of this people. As Don Giuss said, the soloist sings in function of the choir.

So, in the car on the way to work, I told myself that I too belong to a people, I am part of a people, which starts from the House [of Memores Domini], and then all of Memores Domini, and then the Movement, and then the Church, and then my colleagues and then, and then ... and that my being there in the hospital, my expressiveness, my actions, like the soloist in the choir, are in function of the Christian people, derive from this belonging to a people. I was full of peace and certainty.

In these last weeks the climate in the Operating Room has been quite somber. We are feeling the after-effects of COVID: the workload continues to increase, colleagues are collapsing physically and psychologically from exhaustion. Yesterday I arrived at work and the nurses from the night shift had just finished an operation—they had worked all night. Sitting in my office, they were upset as they reported that 7 colleagues had called in sick for the morning shift. I immediately told them, “Wait, before giving me the orders for the day, let me get you a coffee.” So I went to the hospital cafeteria to get breakfast for them. Then while I was trying to plan the schedule for the day so as to cancel as few of the planned surgeries as possible, even though we were very short in personnel, two colleagues from the night shift told me, “Cristina, if you want we can stay a couple of hours to help.” I was shocked! “But what is happening?” I thought.

The day before, Shanna, the new secretary who has been with us for about 3 months, had taken her father to Emergency, where she discovered that her father has an acute form of leukemia. She asked me if I could go with her to visit her father in the Emergency Room because she wanted to introduce me to him. She told me, “I often talk about you to my father, he knows you by name, but now I want him to meet you in person.” We went together, and after a while the doctors arrived and explained the medical situation: the diagnosis, chemotherapy, isolation, etc. I wanted to leave the room; I felt uncomfortable being there at such an important moment, and I wanted the family to have the necessary time and space to face such a mysterious and painful thing. But Shanna told me, “No don't leave, stay here with us.” So I did. When the doctors left, I left Shanna with her father and mother. As I walked out of that room I felt all of their pain, and on my way to mass I sent her a text saying that I needed to go to St. Joseph's Oratory to pray for her and her family and ask God for help. In the evening she answered me, thanking me.

Thus the beauty of the Russian songs heard in the morning, and that experience of being part of a people that they made arise in me expanded into all of my surroundings and became desirable for Shanna and for my colleagues.