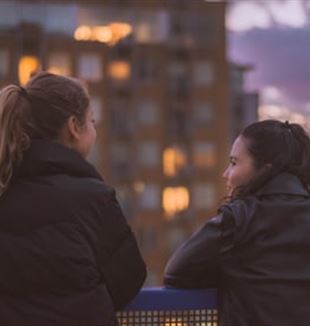 “Grande École” is a meeting place for Middle-School-aged students (grades 6-8) to form a free companionship, informed by the charism of Fr. Giussani.

Montreal: Our need to be accompanied
In Montreal, the Grande École has existed for years. A few times a month, students and the adults responsible for the group would meet to participate in some type of activity and share in friendship. In the past, activities have included going to movies, visiting museums, playing games, doing arts and crafts, and performing charitable works. Cecilia, who helps lead the Grande École in Montreal, describes these moments as “simple but also special gestures that put in front of us beauty and truth, and that make us discover the real desire of our heart.”

Another gesture of the Grande École in Montreal is a weekend trip to Chertsey, Quebec, to spend time together with a congregation of nuns (Monastère Sainte Marie Reine des Coeurs). One student pointed out: “I think it's during these trips that we get to know each other the most and build the strongest friendships.” Tony, who helps with Grande École in Montreal recalls, “These weekend trips [...] were very simple gestures and it’s amazing how they were moved by just staying all together. I even remember kids from past years who were so struck by the nuns that they went home and their parents said they had lived something great.”

However, in the face of the Coronavirus pandemic, necessity required the gatherings of Grande École to take on a different shape. As the in-person gatherings transitioned into Zoom calls, the students voiced a desire to see each other more often, and the group began meeting daily for the first weeks of the confinement. “It showed their need to be accompanied in such unsettling times,” said Cecilia.

During the informal meetings, the students freely shared things with the group like pop songs that they loved, a piece of writing they were working on, a piano piece they were learning, or a photo they had taken. After the killing of George Floyd in Minneapolis in May, students expressed questions about racial injustice, which led to discussions focused on this issue for some weeks, informed by articles, videos, and sharing of personal experiences. Over time, these Zoom calls became a place for both the students and adults to share, more and more freely, their questions and passions, and to take a closer look at them with their friends. As one student in the Montreal community expressed, “I really enjoy sharing beautiful moments with people who have values similar to mine [...] where everyone can share their point of view without ever being judged.”

Toronto: The start of an effortless friendship
The story of Grande École in Toronto began with one of the children in the community expressing her desire to stay with her friends like they do at the CL Summer Vacation. Her father Paolo asked a few friends if they would be willing to take on responsibility for the group, and eventually Anthony and Adam said yes. The Toronto Grande École began meeting over Zoom once a week, to get to know each other, to share things that they found interesting, and to play games.

Amy, whose husband Anthony was helping to lead the Toronto group, had not intended to join in on the Grande École meetings. But the week of the first meeting, in the midst of the isolation of the Coronavirus lockdowns, she changed her mind. “I thought, ‘why not?,” says Amy, “I was in need of a friendly face and a companionship.” Amy began joining the calls regularly, after she realized, “I actually wanted to be with these kids, I was growing in affection for each of them and their questions.”

Although the adult responsibles occasionally felt “uncertain or lost” in the face of leading this new group, they were surprised to recognize that “an effortless friendship” was beginning to form between the participants. Amy was particularly struck by the contribution of one student while they were discussing what they looked forward to when things were “back to normal,’’ commenting that she was excited “to see my friends in person — including all of you.” “After a few weeks together on Zoom, she acknowledged that these people, most of whom she had never actually met before, were her friends,” explains Amy. “This prompted us adults to recognize that something interesting was happening, regardless of how often we asked each other, ‘are we doing this right?’”

The living experience of Grande École in Toronto has also overflowed into people who do not attend the meetings, particularly the parents of some of the students. Laura, whose daughter attends Grande École, recounts how the experience made her more aware of being a daughter to the Father:

"Beginning in March, as the most stringent lockdown measures were being introduced, the Grand École was proposed to middle school students here in Toronto. My daughter cherished those moments online and protected her special space to be with her peers and 'adult friends'. While a friend of mine was recently bemoaning how her own daughter had lived the quarantine, I shared what an anchor Grand École had become for my daughter. I also found myself explaining to her how it had changed my own maternity. In seeing how these adults looked at my daughter and how seriously they took her desires, her fears, her whole destiny — it helped me take my own need for conversion more seriously. Seeing how they try to communicate to her on whom her life really depends, is a reminder for me to make memory of the Father. For this I am grateful.”

Beginning Again
In September, when life had in some ways “gone back to normal,” and most of the students had gone back to school, Amy emailed the Montreal Grande École community with a simple proposal. She was wondering if they would like to discuss the possibility of a Grande École Beginning Day, with the two communities sharing a moment together over Zoom.

The subsequent conference calls between the adult responsibles could have just been “planning meetings” filled with logistics. Instead, led by a provocation from Cecilia that “what we propose to the kids will not be adequate for them unless it is also adequate for us,” the calls became moments for the group to ask essential questions: “Why are we involved in the Grande École?” and, “Do we have something truly worth sharing with these students?” According to Amy, the meetings “helped us immensely, in that they showed us we were not alone in this work, and it was something for us too.”

In response to the uncertainty of the current circumstances, the theme of the Beginning Day came from Claudio Chieffo’s song, Ma Non Avere Paura: “Don’t ever fear, don’t stop on the way / Because my love is faithful and never ceases.” The gesture was a simple and beautiful one: students shared what they did over the summer, listened to a witness from Paula, a friend of the community, and played a game.

For students and adults alike, the Beginning Day renewed one’s enthusiasm and wonder in front of the companionship of Grande École. The students expressed gratitude for meeting the members of the other community, and the recognition that their friendship was, in fact, part of a greater friendship. The adults were moved by the joy and attention to detail the students put into the presentations about their summer, with many bringing beautiful photos to share with the group. It showed that Grande École is a place the students are attracted to, whether or not the activities are always perfectly planned, or the adults say exactly the right thing. Amy expresses it concisely yet profoundly: “I did not make that happen!”

As Grande École continues to meet virtually, the companionship continues to bear unexpected fruit for all involved. Tom, who helps with the Montreal group, says it has changed the way he faces his work as a teacher: “My students’ humanity comes out every day, but I don't necessarily observe it in action. With the Grande École children, I am reminded over and over that the heart my students have is the same as these kids. Therefore, seeing them on Saturday afternoons replenishes my desire to look at my students with the same attention. [...] Essentially, what is promised to me at the Grande École is promised to me at school.”

The Montreal and Toronto Grande École groups are planning to meet together throughout December in order to accompany each other during the season of Advent. In an email chain discussing details of the upcoming meetings, Tony brought the group of responsibles back to the essential: “Let's try to stay attentive to this simplicity that these young people see in our shared friendship. And remember the wonderful gift we've been given in being asked to accompany them.”