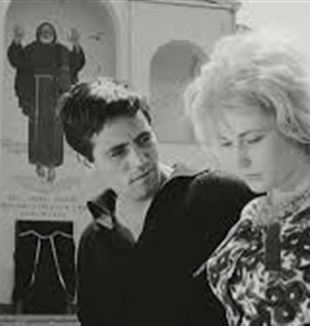 Based on his original novels, director Pier Pasolini’s film Accatone (1961) seems to relate his own struggle full of ambiguity of tending towards nothingness or Mystery. A film that treats the profane with the pious reverence typically reserved for saints. The story follows Accattone’s professional success as a daredevil pimp, his descent into poverty after the arrest of his prostitute, his seemingly heartfelt encounter with a woman called Stella, and the despicable ambiguity shadowing both their entire relationship and his interior struggle in deciding what he truly wants of life. All these events transpire under the unavoidable presence of Christ cinematically rendered through Bach’s St Matthew’s Passion.
( St. Matthew Passion, BWV 244: No. 68 Chorus)

The film opens with Accattone, displaying his bravardo as he risks his life diving from the ledge of a bridge. As a young boy asks him whether he would dive with all his gold, Accattone shouts in reply: “I want to die with all my gold on me, like the Pharaohs” – man deified as not even the river can carry him away. He needlessly flirts death for the sole reason of affirming himself.

In the religious sense, Luigi Giussani writes that “only two types of men capture entirely the grandeur of the human being: the anarchist and the authentically religious man. By nature man is relation to the infinite; on the one hand, the anarchist affirms himself to an infinite degree, while, on the other, the authentically religious mana accepts the infinite as his meaning.”
(The Religious Sense, 1997, McGill Queen Press, 9 )

Accatone’s wild behaviour throughout the film straddles that line between both personalities. His violent self-affirming behaviour of himself takes a turn as his economic fortunes decline. The prostitute on which he depends for income begins a prison sentence for perjury, forcing him to sell his jewelry. One of his friends invokes a prophecy: “today you sell the ring, tomorrow the chain, in seven days the watch, and in 77 days you won’t even have your eyes to weep with.”

It is at this stage that Accattone encounters Stella in what turns out to be one of the most strikingly reverent scenes of the film. He comes across her working and begins talking with her, asking if work was hard, if they paid her well, if she was new. He asks for her name, introducing himself as Vittorio – his real name. “Stella, Stella, show me the path, the just path,” joking after she replies, before finally revealing his thoughts on this chance encounter as he asks her “tell me something, you seem so innocent like a little girl, I can’t explain, without malice.” This carnal human presence stupefies him.

He later chances upon her again, and they develop a relationship, revealing more about their walks of life. In one exchange, Stella asks him about why he bears the name Accattone, and he explains how, while there are many Vittorios, there is only one Accattone.

Despite clearly having shaken Accattone and changed the object of his activities, Stella’s presence does not stop him from slowly returning to old ways, of engaging in “despicable” acts, of pulling her into a life on the streets. At a social evening, Accattone is approached by a man soliciting Stella’s presence due to the interest of two other men. While he doesn’t unequivocally say yes, he merely replies: “let them ask her.” Unable to watch her sitting with them, he begins to throw a tantrum, shouting expressing his intent to dive off the bridge. While he is ultimately stopped, his act contrasts with his self-satisfied expression from the opening scene, as he rubs his face in black mud showing an expression of misery – as though the atrophy of his heart. 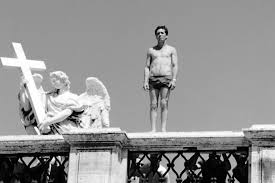 The uncertainty surrounding Accatone’s motive for Stella continues throughout the film, mirroring the inconsistency with which we approach the signs in our life, how we often grasp and cheapen the beautiful that seizes us, pushing us to look beyond. Mistakes, inconsistencies, blindness to the irreducible desire of our “I”.(Julian Carron, What Can Save Us From Nothingness, Introduction, 8)
Yet, something does change in Accattone despite his brokenness. He begins to work in an effort to maintain life with Stella – a departure from pimping -- but is unable to sustain his efforts. In this situation, at the end of his first day, a moment of helplessness comes flashing creating a small opening of him to utter a quickly missed “Thy will be done.”

In the edited volume Generating Traces, Luigi Giussani writes that “in his weakness, every man is a sinner [;] we cannot establish any true relationship, unless we begin from the awareness of being sinners, of what we lack and of where we fail.” As the many affirmations of himself fall away, Accattone in one instant utters the expression just as an ounce of heaviness is lifted, and the desires of the heart interiorly swell into a scream of misery and begging – unable to wholly express itself through that little opening – save through a soft murmur of “Thy will be done.” A tugging tension to which we return – judged not by quantitative metric or an achieved result, but as a love, expressed in that cry, within the full significance of flashing clarity, a moment of freedom: the essence of an affirmation for an Other.(Generating Traces, 58)

That night he experiences a surreal dream – as though a prophecy – of a procession waiting for his arrival before commencing. Asking what has happened, the reply: “don’t you know, Accattone is dead.” Reaching a gate, he’s stopped from entering with the rest of the cortege. Jumping the fence, he observes a beautiful valley under the radiant sun as a man digs his grave in the shadows. Timidly, he asks: “say sir, why don’t you dig a bit further on? The earth is all dark here.” And he insists after a refusal: “just a bit over there. Please, sir. There in the light is better.” And the man laughs with delight, accepting.

The film reminds us that that we do not sustain our happiness, that are we are not the source of our own being – of our salvation. That the drama lies not in producing a result but living in a state of tension. That like with the Fiat of the Virgin, Vittorio’s Thy will be done and later entreaty to be buried under the sun touches on something essential of the Christian proposal – of asking, of begging in the passing recognition a Presence despite our ambiguous inconsistencies, in a flashing moment of freedom as a state of tension not yet fulfilled (The Religious Sense, Consequences of the Unreasonable Position, 89) tending to that small space of an opening towards the infinite, towards Mystery – so that the “love of God […] can take root like a flower of humanity even in the midst of the wreck of our half-dead body.” (The Holy Rosary & Angelus, Notes for Meditation on the Angelus by Luigi Giussani, p. 7)