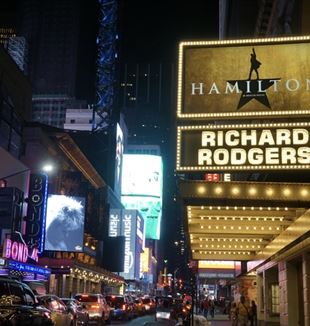 On July 3rd, just in time for American Independence Day Weekend, “Hamilton” premiered on the Disney+ streaming service, making the smash-hit historical hip-hop musical virtually available to the masses. While you might have needed to enter a lottery or have a friend in a high place to score tickets for the live show, you can now enjoy a filmed version of the original Broadway cast performing in 2016.
“Hamilton” tells the story of an oft-overlooked member of the founding fathers, Alexander Hamilton, the first United States Secretary of the Treasury.
Although the buzz surrounding the show was immediate and (as someone with many musical-theater fans for friends) hard to ignore, I never really gave it much thought, knowing how difficult it was to procure tickets. However, when it became available to stream, I figured I’d give it a chance and see what all the hype was about. While I might not have thought about it at the moment, the timing was definitely interesting: going into Independence Day, I, along with many Americans, was filled with uneasiness in the wake of the killing of George Floyd and the civil unrest that erupted afterwards. Questions that had been bouncing around in my head for the past month were exacerbated even more so: “Is there something capable of uniting the population of the United States?” “Does the history and identity of my country actually have anything to do with me?”

While I won’t claim that the musical gave me the answers to these questions, it certainly helped me to look at them in a new way. I was particularly struck by the way the show emphasizes the human element of the history of the United States. When I was learning history in school, it was easy to think of it in broad strokes: a collection of abstract ideas (“Freedom” and “Justice”) that intertwined with major events (the Boston Tea Party, etc.). “Hamilton,” however, through its ingenious lyricism and music, illustrates how the ideals we take advantage of today as “American values” originated as concrete human desires, which were the driving force behind the events that set into motion the founding of our nation.
Take for example, the group of rag-tag revolutionaries that Alexander Hamilton befriends when he first moves to mainland America. Each member of the group (along with their own unique rapping style) has their own, very human, reasons for buying into the revolutionary effort. There’s Hercules Mulligan, a tailor, who sees the revolution as an opportunity for social and professional advancement. There’s La Fayette, who sympathizes with the American effort due to its similarities with the struggles of his home country, France. And there’s John Laurens, a passionate abolitionist who raps, “We’ll never be truly free/Until those in bondage have the same rights as you and me,” and dreams of founding the first all-Black battalion. Each of them, not in spite of, but through their own personal, imperfect, histories, have come to recognize a common ideal: “Freedom/something they can never take away,” which they sing of in unison.

The humanity of the Founding Fathers is nowhere more apparent than in the case of the titular character, Alexander Hamilton. On the surface, his story is a paradigm of the American dream. Hamilton was born out of wedlock on a small island in the Caribbean and then orphaned at a young age. He was sent to the United States to be educated, and when the Revolutionary War began, made his way up through the ranks of the military, serving for four years as General George Washington’s chief aide, and eventually being appointed the first Treasury Secretary, all before the age of 32.
It could be easy to conceive of Hamilton as the self-made-man par excellence-- a line from the musical describes him as “another immigrant/coming up from the bottom.” While the show, in general, seems to view the Hamilton with admiration, it also does not shy away from his weaknesses, particularly in the latter half. After a first act that essentially chronicles Hamilton’s ascent to success, in the second act, Alexander makes two critical mistakes. First, he engages in an extramarital affair, and later, fails to dissuade his eldest son from engaging in a duel, in which he ends up tragically dying.

The most beautiful moment of the musical, in my opinion, comes in the wake of Hamilton’s wrongdoings. Alexander and his wife, Eliza, have moved to a quieter part of New York in order to better grieve their son. Hamilton stands by Eliza’s side and sings alone of their grief: “a suffering too terrible to name.” Eliza remains silent and stone-faced throughout the number, but at a certain point, grasps Hamilton’s hand to join him in song, and it is understood she has forgiven him for his indiscretions. In song, the ensemble describes the action as “a grace too powerful to name.”
In this moment, the show’s narrative of its main character is flipped. No longer is Hamilton able to stand on the merit of his accomplishments alone-- instead, we recognize him as a deeply flawed human, who’s only hope for redemption, just like any of us, is a profound mercy. Throughout the musical, Hamilton speaks often about his legacy, about making a name for himself-- “Don’t be shocked when your history book mentions me.” In the end, however, after Hamilton’s untimely death in a duel, it is Eliza, out of love for her husband, who preserves his legacy. The show ends on this note, with the song “Who Lives, Who Dies, Who Tells Your Story,” in which Eliza details her efforts in the last 50 years of her life, including publishing large volumes of Hamilton’s writings, and opening the first private orphanage in New York City.
By ending with the focus on Eliza, rather than Alexander, the creators of “Hamilton” seem to be saying something: that human greatness does not lie in achievement alone, but the “story” of our life truly begins when our weaknesses are looked upon with mercy. “Hamilton” helped me to recognize the human faces of the history of America. Of course my country is not perfect-- how could it be, when it was founded by, and continues to be made up of, flawed humans, like Hamilton himself? Of course, I don’t have the answer of how to unite our seemingly evermore divided country, but watching “Hamilton” brought me back to a truer starting point: my own broken humanity, and my own need for it to be looked upon with mercy.