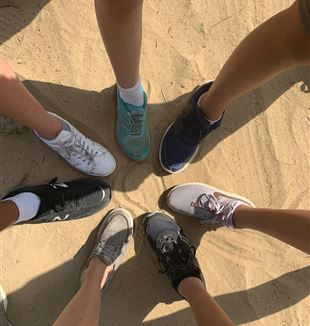 At the end of June, a few friends in Toronto met to discuss the possibility of organizing an “alternate vacation.” In the preceding months, the situation with COVID-19 made it clear that the summer vacations normally held across Canada could no longer take place. At that time, gatherings were restricted to 10 people, social distancing was mandated, and most indoor public venues remained closed. Despite these limitations and with no roadmap to follow, there was still a desire from individuals in the community to live some form of vacation together.

The Idea of Vacation: “A Paradigm for Living”

Anthony Savidge was at the first planning meeting, and recounts the reaction of those present to the prospect of planning a vacation in a pandemic: “When we started discussing possibilities, as much as I was hopeful that we could organize something beautiful for the community, I was full of doubts. I caught myself thinking, ‘what’s the point?’ because in my mind the vacation depended on a particular setting, particular amenities, and especially the opportunity to gather together physically as a community. In our first meeting, almost everyone shared this sentiment in some form, but it was also clear that our desire was greater—and for something greater—than our skepticism.”

The planning committee began by reading a text by Fr. Carron about the CL vacations, in which he describes the vacation as “a paradigm for living.” For Anthony, recalling the memory of previous vacations holds something beautiful: “It is a memory that I carry with me all the time; of having been looked at by eyes full of love and wonder.” Starting from this memory, he “could not help but long to share it, even if it didn’t look exactly the same as it had in previous years.”

Instead of the usual 5-day vacation altogether, the idea behind the alternate vacation has been to hold several events over the course of the summer, including games, presentations on St. Augustine and Vincent Van Gogh, a witness from Dr. Amedeo Capetti, and a pilgrimage to a local Marian shrine. The goal of this alternate vacation has been to accompany one another for the whole summer, by following a path indicated by the points in the Exercises. Some events have been held over Zoom, but with some creativity and where circumstances have allowed, the community has also managed to gather in person.

“I Was Aware of Being Preferred”

One of the early challenges faced by the planning committee was to organize a game for nearly 70 people while following the provincial distancing regulations. After several weeks of careful planning, the result was a virtual scavenger hunt in High Park, with pre-assigned teams, meeting points, riddles, and clue locations—all over WhatsApp.

Anthony, in particular, spent several hours working out these details, and describes the experience of planning the game: “I realize now that all the while I spent biking around High Park or writing riddles for teams to solve was time spent with my friends’ faces in mind. It wasn’t just any game I was working on, it was a game for my friends, and because of that the work was light.”

On the day of the game, nearly 70 people from Toronto gathered at different points of High Park. After solving each riddle, teams would send a picture or video to their coordinator to show they had completed the task and to get the next clue. Anthony could not help but be struck by how happy everyone was that day, in spite of the 40-degree weather: “As I walked around and saw all my friends running about the park having fun, I also noticed the other people in the park, and I thought, ‘these people probably can’t even imagine what we are doing here today—can’t even conceive of spending a day like this,’ which is very normal, and I don’t say this to be condescending. But I was aware of being preferred somehow, because even on a 40-degree day, I was happy that I wasn’t just going to the pool by myself or drinking a cold beer, but that I was with my friends—friends who share the same deep need as I do—even if it was over WhatsApp or from a distance.”

“Christ Can Truly Meet Us in Any Circumstance”

Since that first meeting at the end of June, what has changed for those asked to plan this vacation? For Anthony, many things are still the same. He still gets overwhelmed by the idea of spending extra hours organizing activities for the community. If there has been a change, though, it is in having lived “an experience I can point to now, like the apostles when Jesus fed the hungry crowds, of offering what little I have to Him and seeing Him multiply it.”

There has also been a discovery that it is possible to be free even when the circumstances seem confining or inauspicious. Anthony says that he was challenged by others on the planning committee to verify whether the essential elements of a vacation are really just about eating, relaxing, and praying together: “All of those things can be nice, but as I so often forget, they don’t touch on the source of the change that occurs in me at a vacation; they touch only on the externals, and I mistake one for the other.”

Instead, Anthony observed that he has been asked “to verify if it’s true that Christ can truly meet us in any circumstance.” In looking at his experience, he sees that even an unfavourable circumstance can be fertile ground for something fruitful: “As far as I was concerned, everyone was tired of Zoom meetings, and I figured that we needed to be physically together as a community in order to allow His presence to enter. But the signs of His presence have been clear, especially in the Zoom call we had with Dr. Capetti, who happily called from his car on his way home from a hospital shift and reminded us not to be content with things that are insufficient for our hearts.”