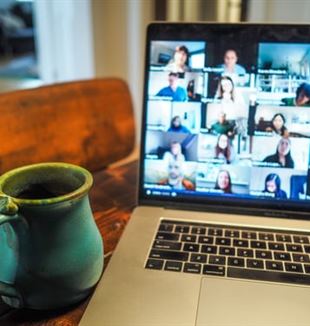 Together with our GS group we had started to meet to say the Angelus on Zoom every day from the second week of confinement. Bossa (Elena) proposed it at the first school of community that we did virtually.

Every day, the Angelus was followed by a small presentation that one of the GS made about one of their passions, something that had interested them. Marie-Emmanuelle says that this was her favourite part: "It allowed us to not only see the faces of people, but to see more of them. It was a way to get closer to each other.”
For example, we learned that Marie Véronique loved the Arts, and that all the boys had a passion for soccer.

At first, there were many of us in the morning and, little by little, only a small group of dedicated ones remained.
This moment could have become redundant if some Toronto GS had not joined
us. "It allowed us to see that we were not the only ones living in isolation. We were able to expand GS without having to go there,” says Marie Véronique. "Now when we go to see each other in person it will be easier to build relationships. We share something together,” adds Marie-Emmanuelle.

After several schedule changes, the Angelus time was set at 9:30 am, too early for some. "At first I found it early because I usually get up at 10:30 am, but now I like to get up at 9:00 am to say the Angelus," says Marie Veronique.

Gabriele says that the Angelus in the morning sets the tone for the day. It's a good way to start the day with friends. "With the Angelus as a start of the day, I'm not just saying the prayer and then continuing my day, it is not just a chain of words. We try to see the meaning behind the words.” says Marie-Emmanuelle.
After three months of doing the Angelus every morning, Bossa, who originally proposed this gesture, had to leave Canada, but we decided to continue with this moment every day.
“Julia wonders what she will do if she can't see our faces in the morning, and I realize that her desire to continue to have our morning meetings has become my desire too,” says Heloise.

“This makes me see the value of this gesture that could seem very banal. This is the only time during which I stop during the day to ask," says Heloise.
The final words come from Julia who says: “The Virgin pours her grace into our hearts. After I have recited the Angelus with my friends in the morning, my day becomes both an offering to Mary and a closer relationship with her. Without this essential gesture, my day is without life and without fullness. ”